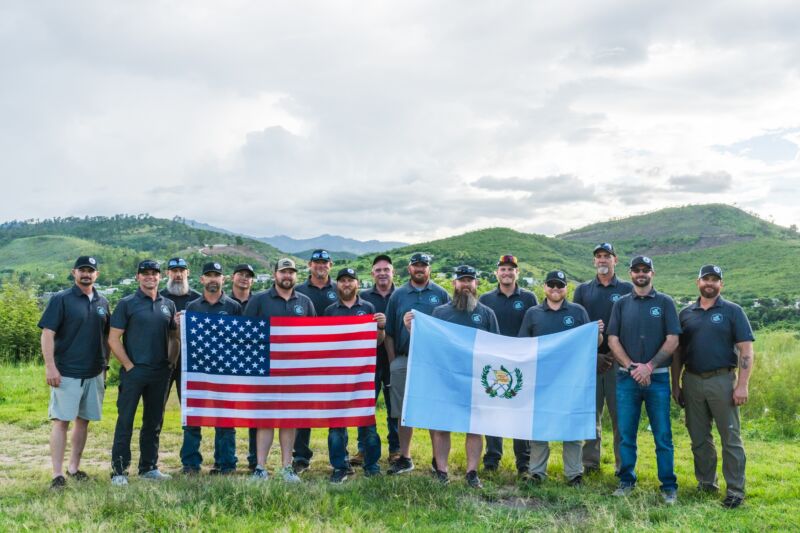 In this season of giving thanks, adults and children in the isolated, mountainous village of La Montanita de la Virgen inGuatemala have much to be thankful for; including the fact that they are no longer in the dark. The village received electricity this fall when electric cooperative volunteer linemen built powerlines and wired homes, turning the lights on for the first time.

Sixteen volunteer linemen spent three weeks at the project site in the region of Jalapa in east of Guatemala City building powerlines and wiring 84 structures, including one elementary school and two churches. The project consisted of 77 poles in approximately 5.5 miles of line and six transformers installed by the linemen. Each home received four lightbulbs, two light switches and two electrical outlets.

The local partner for this project was Empresa Eléctrica Municipal de San Pedro Pinula, a municipal utility, now responsible for the maintenance of the newly built infrastructure.

Linemen say they were positively impacted by this mission and came home with a changed outlook on life.

“The most impactful part of this project was seeing the resiliency of the people in the village. They are from the dawn of time and have maintained themselves for all these years,” Justin Marsh with Southwest Rural Electric Association based in Tipton, Okla. said. “I’d like to think we have helped to improve their existence; I know they have improved mine.”

Electric cooperatives have a long-standing tradition of bringing lights where there are none. More than 80 years ago, cooperatives brought power to rural America and its countryside; given its origins, electric co-ops are willing and well positioned to help other areas that do not have access to electric power.

“Bringing electricity to remote areas in developing countries takes electric cooperatives back to their roots,” says Chris Meyers, general manager of the Oklahoma Association of Electric Cooperatives. “It reinforces our commitment to improve the quality of life for local communities at home and abroad. Access to electricity will bring economic empowerment, better access to health care and education and enhanced safety for these villagers. It’s a life-changing gift.”

Oklahoma’s electric cooperatives have established a 501(c)3 not-for-profit, The Oklahoma Energy Trails Foundation, to support this cause; five projects have been sponsored since 2016.

All contributions to the Foundation are tax-deductible.