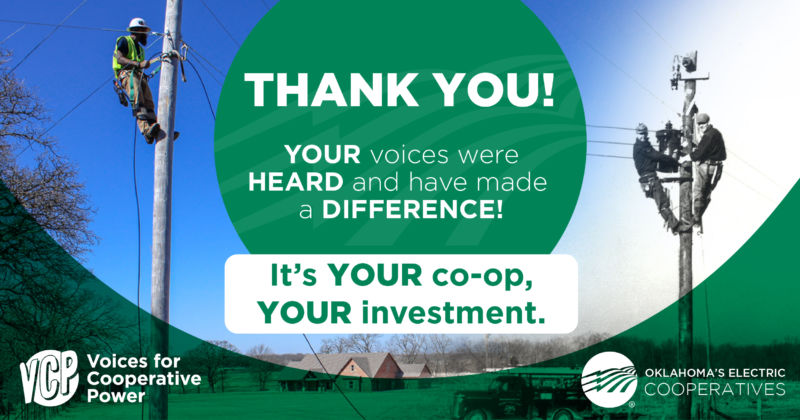 It has made a positive difference!

After much collaboration with your representatives, an amendment was filed for HB-3835 that included a compromise with proposals from Oklahoma’s electric cooperatives that will enable your cooperative to protect your investment and promote broadband expansion throughout the state.

Because you made your voice heard, your co-op directors, managers and employees asked your representative to vote on HB-3835 this morning. This bill now stands as proof that our collective voices were heard and your electric cooperative can adequately recover costs and protect the investment of their member-owners.

HB-3835 passed today and it’s a result of much cooperation, resilience, and dedication.

We thank YOU for standing up for your rural electric cooperative and your investment as a member-owner.

We thank your state representatives for taking the time to listen and work with us.

This is cooperation. This is the cooperative difference.

Differences between homeowner and renter: a pole attachment analogy 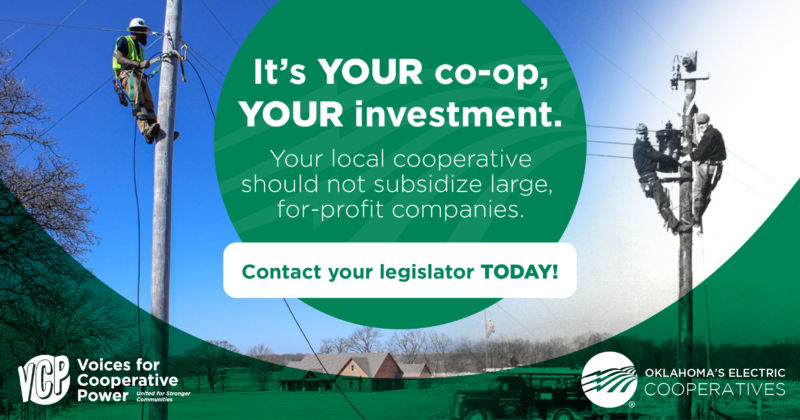 The renters – who are large, for-profit internet providers who have had no interest in rural Oklahoma until taxpayers started paying for their infrastructure – have spent three legislative sessions pushing legislation that would require your co-op to accept rent less than the cost of operating and maintaining the electrical infrastructure.

Despite the objection to government intervention, Oklahoma’s electric cooperatives have offered several solutions. Most recently, cooperatives offered a pole attachment formula that provides for the cooperative to recover its fully allocated cost for infrastructure. It encourages negotiated rates first, but sets price caps on what co-ops can charge for pole attachments. Nine out of 27 distribution co-ops would be capped at a rate lower than what these renters have previously agreed to pay under contracts. Under the cooperatives’ proposal, one third of our cooperatives will have lower attachment rates when their current contracts expire. Cooperatives also offered provisions that would prohibit cross-subsidization between the electric cooperative and their subsidiaries offering fiber to the home service.

Electric co-ops support the expansion of broadband to rural communities. Nine of Oklahoma’s electric cooperatives are providing broadband through subsidiaries to their membership. They are the only broadband provider with up to a 50% adoption rate because they are truly serving unserved areas and they are trusted with exceptional prices and service. The other electric co-ops partner with internet providers to extend broadband into their territories.

Several studies have shown pole attachment rates are not a barrier to broadband expansion. In fact, it is the least expensive cost of extending broadband cable and facilities. Electric cooperatives are doing their part. As they seek the best interest of their consumer-members, electric co-ops shouldn’t be required to subsidize much larger corporate broadband providers with under compensated attachment rates.