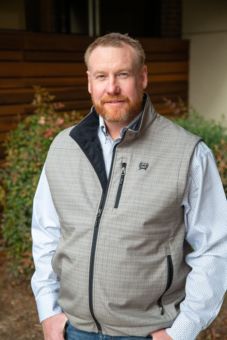 The Oklahoma Association of Electric Cooperatives (OAEC) is pleased to announce Jason Brown has been selected the association’s new safety & loss control instructor. In this role, Brown will serve as the designated safety instructor for electric cooperatives in northwest Oklahoma. Brown joins a team of two other statewide safety instructors who conduct safety trainings for Oklahoma’s electric cooperatives, covering all 77 counties in the state of Oklahoma.

“Jason has vast experience in the electric cooperative industry and is fully invested in a culture of safety, which is vital for our co-ops. He will be a strong asset for Oklahoma’s electric cooperatives,” Derec Janaway, OAEC’s director of Safety & Loss Control said.

Brown is a native of Lindsay, Oklahoma. He graduated from Maysville High School and began his career as an electrician at Bob Bartley Electric, followed by a couple years as an apprentice lineman for the City of Lindsay.

In 2001, Brown joined Rural Electric Cooperative (REC) as an electrician for their then subsidiary, Payne Electric, conducting residential and commercial wiring. When the subsidiary closed, Brown moved to REC’s Member Services Department working at the co-op’s community building. After a few years in this role, he moved to the Operations Department where he worked in the maintenance crew and eventually an apprentice lineman, digger operator, bucket operator, lead lineman, becoming the construction crew foreman in 2018. In March of 2021, Brown was promoted as REC’s safety director. Jason also served in the inaugural Energy Trails electrification project that took place in Bolivia in 2016 under the coordination of NRECA International.

Brown is a Certified Loss Control Professional, a national designation that ensures safety professionals have achieved the benchmark of competency and commitment to safety in the electric cooperative industry.

“I am privileged to be a part of the electric cooperative family. I enjoy the focus on safety and the opportunity to teach and provide guidance to linemen and outside personnel,” Brown said. “I’m eager to begin building a network in the northwestern part of the state and continue to foster a culture in which we can lean on each other for input and questions while prioritizing safety.”