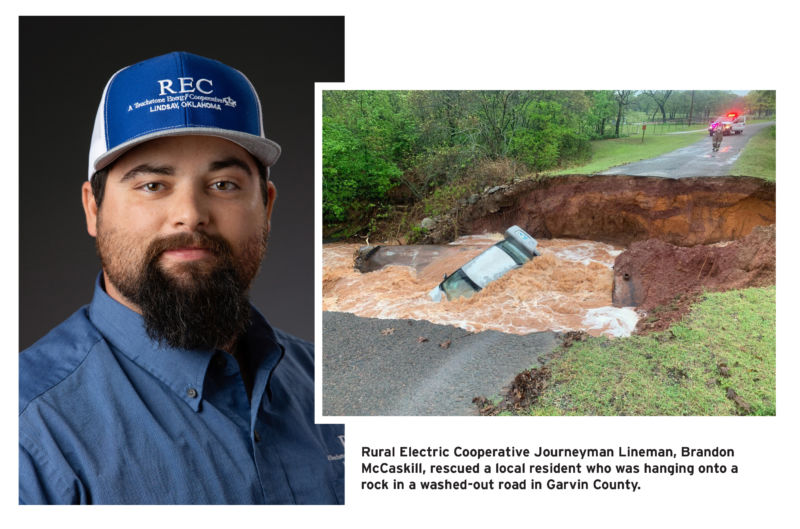 As severe thunderstorms were forecasted into the night and early morning, Brandon McCaskill was prepared for a long night of work. McCaskill, a journeyman lineman with Rural Electric Cooperative based in Lindsay, Oklahoma, took on an overnight shift that began at 9 p.m. on Tuesday, April 27.

McCaskill and his fellow crew members were ready to respond to outage calls through the night and into the early morning hours. Weather forecasts for the region, including his co-op’s service area in south-central Oklahoma, were calling for excessive rain, flooding potential and the likelihood of tornadoes, a “typical” spring day in Oklahoma.

McCaskill wrapped up an outage call at 4:45 a.m. on Wednesday, April 28, and was headed to restore another outage near Elmore City, Oklahoma when he came across a washed-out road in Garvin County. He knew he needed to turn around, but it was still pretty dark and he opened his window to see his surroundings better.

“When I opened the truck’s window, I heard some whistling and I thought it was a bird,” McCaskill said. “But then I heard some yelling, someone was asking for help. I left the truck and went to the edge of the creek.”

It was at that point that McCaskill saw a woman hanging on to a rock by the rushing stream of water; her vehicle had slipped into the washed-out road and she managed to get out of the car, but was attempting not to be carried away by water.

McCaskill wasted no time and quickly jumped to action. He went to his truck and contacted his co-op’s dispatch, asking them to call 911. Knowing she was scared and tired of hanging onto the rock, he followed his instincts and grabbed an 80-feet handline rope. He managed to throw the handline to the woman and provided instructions for her to wrap the rope around her body so he could pull her out.

“It was a nerve-wrecking experience. I tried to calm her down the best I could while explaining to her how to use the handline,” McCaskill said. “All that I kept thinking the whole time was ‘Don’t let go.’”

After some struggle, McCaskill successfully pulled the woman out and brought her to solid ground. McCaskill performed this rescue operation on his own. A few minutes after the woman was rescued, the Elmore City Fire Department and the Pernell Volunteer Fire Department were on the scene. He later learned the woman is a member of Rural Electric Cooperative.

“She appeared to have scratches and cuts, and she was soaked wet and very much in shock,” McCaskill said. “But she was safe.”

As a lineman, McCaskill undergoes regular safety trainings. Due to an ongoing commitment to a culture of safety, being alert to potential hazardous situations can come as second nature to line workers. In occasional situations, like this one, they can be the first ones at a scene even before first responders arrive.

“This speaks to the caliber of a lineman. We are proud of the work our linemen do every day, and instances like this allows others to see the kind of people we have working at REC,” Ricks said. “We value the importance of training and having our employees ready in any situation. This is a moment where training is critical, and we are proud of the quick thinking and his immediate response.”

And how did he feel once this unexpected mission was accomplished? “It wore me out, but I felt really good,” McCaskill said with a smile.