Two weeks after a historic early season ice storm, nearly 175 residential outages remain atCKenergy Electric Cooperative’s service territory. Residential outages are a priority and are expected to be restored by end of the day on Tuesday, Nov. 10. Other remaining outages for commercial, industrial and farm accounts at CKenergy’s territory will take additional days for restoration. Early estimates for impacted co-ops show a total in damages of more than $26 million. Some co-ops experienced greater damage to infrastructure resulting in longer restoration times. Every electric cooperative in Oklahoma impacted by this system is grateful for the patience, kindness and understanding of their members. Lineworkers have tirelessly worked to restore power. The mission continues until the light is on for every member.

As of 10:30 a.m. on Wednesday, Nov. 4, Oklahoma’s electric cooperatives report 6,153 outages. The lingering outages are a direct result of last week’s historic ‘early season’ ice storm, which brought enormous devastation to electric utility infrastructure. Assessments from Oklahoma’s electric cooperatives reveal an estimated 4,200+ poles and 9,000 cross arms were destroyed, in addition to hundreds of thousands of damaged conductor spans, plus damaged transformers, meter loops and special equipment. Collectively, Oklahoma’s electric cooperatives estimate more than $26 million in damages. When disasters of this scale take place, Oklahoma’s electric cooperatives prioritize restoration for residential consumers ahead of restoration for industrial, commercial and farm accounts. This means that not all of the outages shown on the statewide outage map represent homes. Residential outages remaining across Cimarron Electric Cooperative’s territory are expected to be restored by midnight; CKenergy Electric Cooperative, Inc. currently reports 5,238 outages. These outages will last longer, possibly until early next week. Multiple mutual aid crews from Missouri and Kansas as well as contractor crews continue working on repairs alongside local crews. This work will not stop until every co-op member has their power restored. Continue monitoring statewide outages at: https://bit.ly/3eejJHP 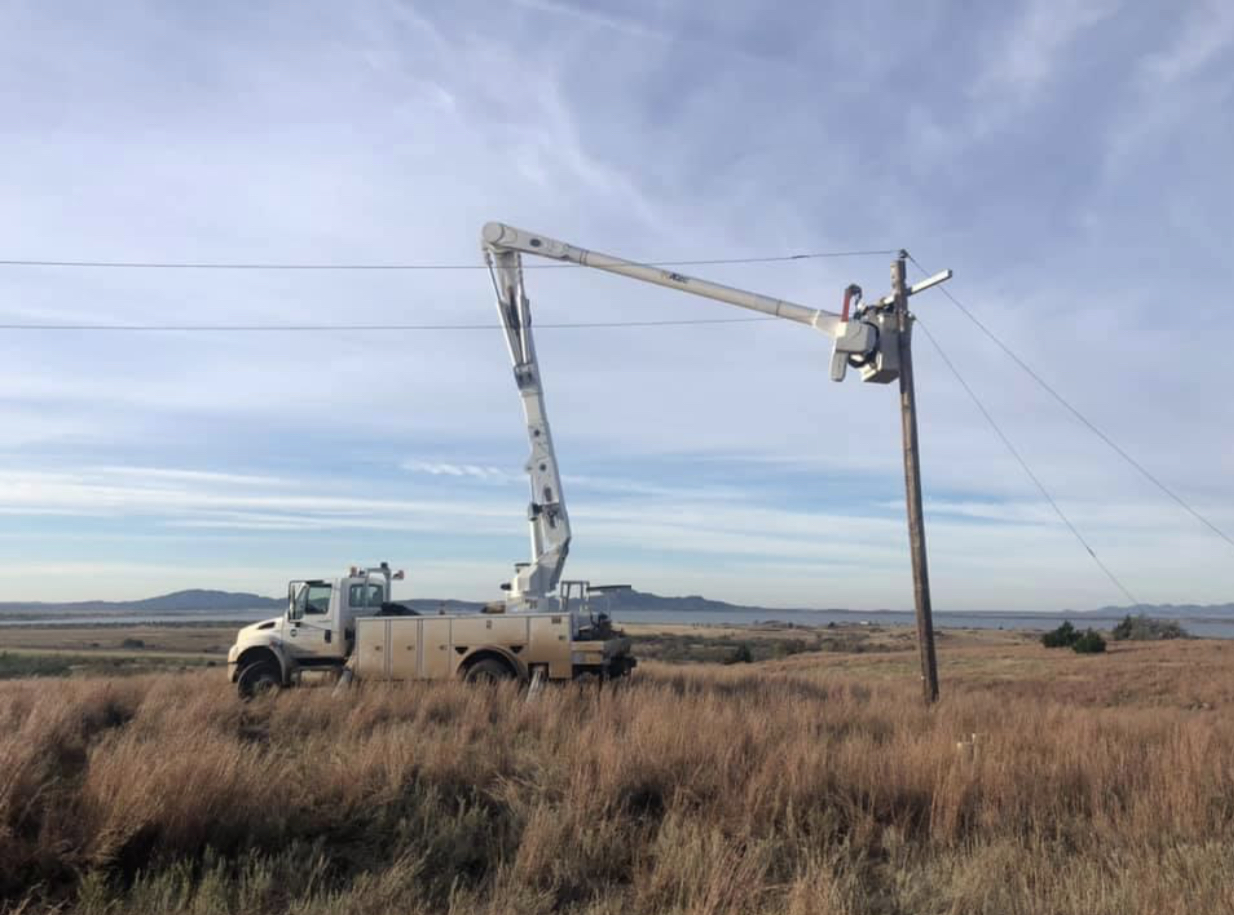 One week ago, a significant portion of Oklahoma was experiencing a historic ‘early season’ ice storm. At its peak, Oklahoma’s electric cooperatives reported 76,300+ outages. Thankfully, warmer temps later in the week as well as a growing number of “boots on the ground” with mutual aid assistance crews from sister co-ops in Oklahoma and neighboring states (Kansas, Missouri and Arkansas) aided in a steady, but challenging restoration of power outages. Muddy roads, high winds and record-breaking devastation of co-op infrastructure hampered efforts as crews pressed on.

As of 12 p.m. on Monday, Nov. 2, co-ops report just under 9,500 outages. Outages began to take place on late Sunday, Oct. 25. While significant progress continues, this has been a multi-day outage event for some members in the state. Hardest-hit co-ops project residential members will have power restored by Thursday or sooner. However, some CKenergy members may be looking at a more extended outage as crews continue to work around the clock to repair damages in their service territory. Currently, CKenergy has 400 crew members out in the field working to restore outages. Oklahoma’s electric cooperatives have appreciated the membership’s kindness, patience and understanding during this trying time. Collectively, early estimates show impacted co-ops are looking at multi-million dollar in damages from this ice event. At this time, most of the impacted co-ops have reported that restoration to polling stations have been completed or will be complete by end of day on Monday, Nov. 2 ahead of elections.

Over the weekend, Western Farmers Electric Cooperative, the power supplier for 17 distribution electric cooperatives in Oklahoma, reported that preliminary damage estimates indicate that some 173 transmission structures were downed during the ice storm, with totals expected to rise. This total includes both single pole transmission structures, as well as H-structures, which have two poles. WFEC began aerial inspections on Friday, Oct. 30. WFEC crews and contractor crews are diligently working to repair damages to critical transmission infrastructure as well as to substations.

Continue to follow on statewide outage impacts at: https://bit.ly/3eejJHP

At the peak of the ice storm, co-ops were reporting a collective total of 76,300+ outages.

Western Farmers Electric Cooperative, the power supplier for 17 distribution cooperatives in Oklahoma, reports they continue to work with contractor crews to repair significant damage on their infrastructure. While several of WFEC substations were energized on Thursday evening and Friday morning, several others remained off, specifically those located in hardest-hit areas. WFEC reported that on their last count, with assessment still continuing in some areas, over 85 transmission structures were downed or damaged. Crews are also working on a stretch of 19 miles of downed 138-kilovolt transmission line, including over 75 structures, on both sides of Tuttle.

Linecrews are fully dedicated to this ongoing restoration effort.

At 11:30 a.m. on Thursday, Oklahoma’s electric cooperatives are beginning to see a decrease in the number of outages. Outages are down to just below 52,000 from around 61,200 last night. Temperatures are above freezing, and ice is melting, which helps. Although muddy roads and strong winds still pose a challenge, electric cooperative crews, along with mutual aid crews from Kansas, Missouri, Arkansas and Oklahoma, and contractors, are working around the clock to ensure outages are restored to all members. Currently, there are 16 electric cooperatives that have sent mutual aid crews and equipment to help in this restoration effort. Western Farmers Electric Cooperative also reports that they will be working with contractor crews on restoration efforts with staff still monitoring several substation issues. Oklahoma’s electric cooperatives are hopeful that steady progress will be made today.

On Sunday, October 25, a significant winter storm system began to develop in Oklahoma. The system, which brought an ice storm warning for most of central and parts of western Oklahoma, is considered historic due to its early fall timeline. At its peak, Oklahoma’s electric cooperatives experienced 74,439 outages. Outages are still taking place today, Wednesday, October 28 and expected to last several days in some cases. Restoration efforts are ongoing. Collectively, utilities in the state of Oklahoma, including investor-owned and a few municipalities, have reported more than 353,000 consumers without power.

On Monday, October 26, Governor Kevin Stitt issued an Emergency Declaration for 47 Oklahoma counties due to severe winter weather, freezing rain and ice accumulations. While it is still too early to fully assess all storm damage, the impacted electric cooperatives report structural damage that includes broken cross arms and poles. High winds have caused galloping lines in areas where power lines are already coated in thick layers of ice. Heavy ice accumulations have caused trees to snap and limbs and branches to break, making power outages even more likely.

As of early Wednesday, mutual aid crews from at least 13 electric cooperatives – including sister cooperatives from Missouri and Arkansas – are assisting impacted co-ops in Oklahoma. Damage has been extensive; this may be a multi-day outage event for some Oklahoma consumers in hard-hit areas. 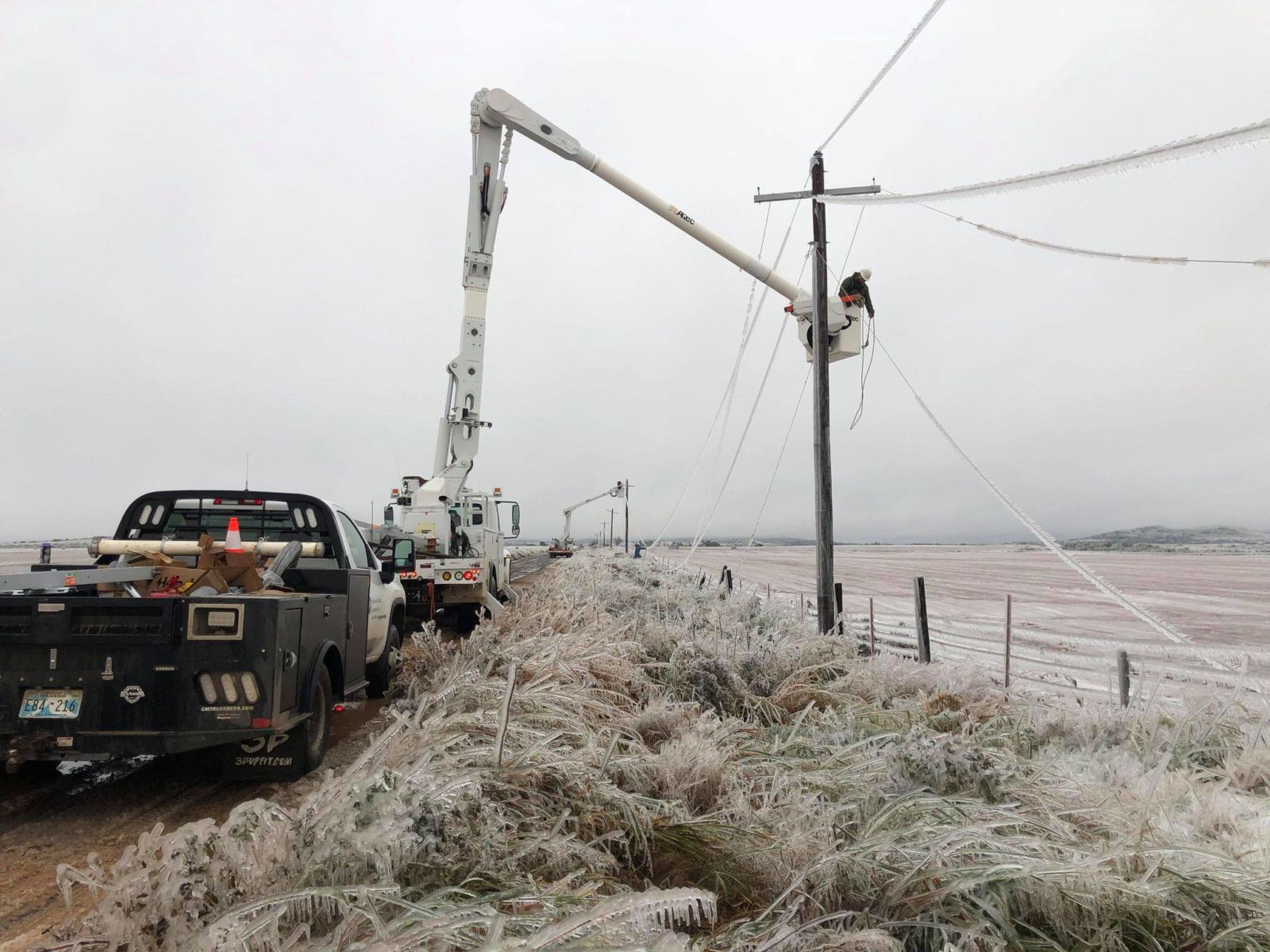